Cambassy is an app that allows you to view places in the eyes of people from your country, helping you view unique content. 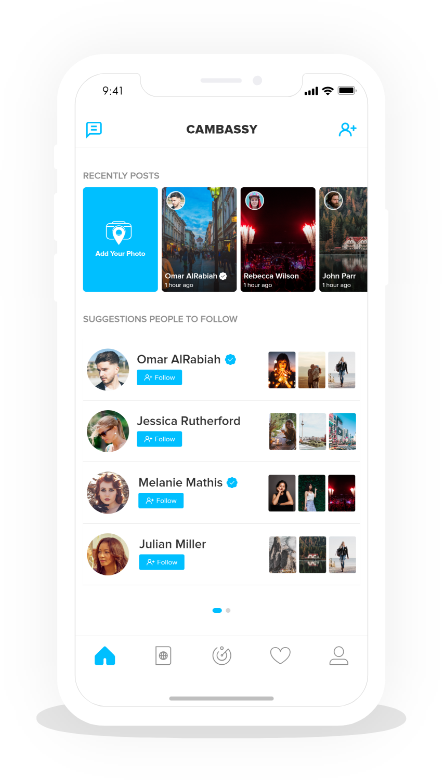 Cambassy is a social travel app that allows you to view places in the eyes of people from your country (Cambassadors), helping you view unique content.

Cambassy is a play on the words Camera & Embassy , and users who represent their country are called Cambassadors (Ambassadors).

Why should I use Cambassy?

For travel inspiration . Cambassy inspires you to travel to new places, by improving how you see them through your travel ambassadors.

How can I use Cambassy?

You can use Cambassy to become a travel ambassador to your country while traveling abroad, or you can browse travel experiences of other travel ambassadors from your country. Everyone can use Cambassy to view a unique angle of the world. Travelers, Expats , and International Students will find Cambassy a perfect platform to share their journey with people from their home country & the rest of the world, and anyone with the Cambassy app can view the journey of people from all over the world even if they never traveled! For example, a Japanese user living or travelling to Brazil can become a Japanese Cambassador to Brazil, and share the Brazilian travel experience with other Japanese back home.

How did we come up with Cambassy?

The Cambassy team found difficulty in finding great content for travel destinations around the world. When the search for Italy as a tourist destination was initiated, the content available before launching the Cambassy app was tourism advertising photos, hotel ratings and general information about the country. There was no content from students studying in the country, expats working there, or content from tourists in Italy at the time of search. The dilemma facing the Cambassy team was that the content was not a capture of the moment. Cambassy took the initiative to solve this problem by creating an app that highlights the experiences of expatriates, international students and travelers within a particular destination, to show a new kind of content that adds to the current content of tourism and travel. The idea was that there would be ambassadors from your country around the world, conveying a modern image with their eyes to the eyes of their people, and sharing it with the world.

Cambassy aspires to be a platform to help people view their destinations accurately, discover the world and their countries from a new perspective, & inspires users to choose the right destination for their travel purpose. There will be many great features added in the future to further allow the display of better content & better travel. Such as: trip planning, ability to become an ambassador of an event such as World Cup or Fashion, and live broadcasting. As we progress, Cambassy will work with new technologies such as advance e-commerce and artificial intelligence to help improve the platform further.

Ready? Get it on